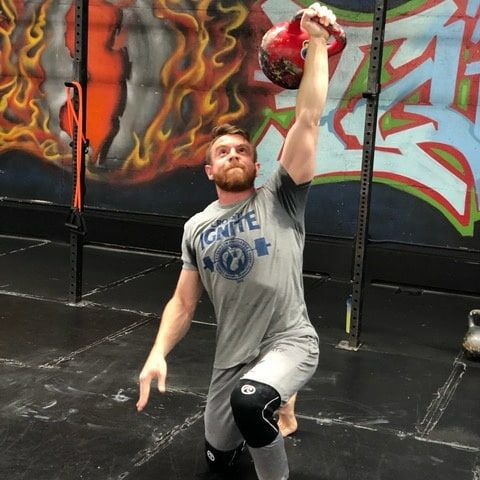 Fitness was not an important aspect of my life until I was about 20 yearsold. At 20 though, I had made the decision to join the Marine Corps, butwas unable to for very silly reasons. I took the next best thing insteadand went to the Navy recruiting office and signed on the dotted line tobecome a United States Navy Sailor and eventually became a Corpsman. At thestart of this journey in September of 2011, I knew I had serious work todo. I remember vividly my first few runs and doing push-ups and not beingable to do pull-ups at this critical juncture of joining the military. Ifound Coach Steve and CFI through my cousin Anthony and never looked backafter joining. Ignite had taught me a lot prior to joining the military andonce I was fully into the service I realized a few things: first, barelyanyone truly cared about fitness. Two, workouts were meant to crush anddemoralize people versus building them up and making them see their truepotential.Between my time in the Navy and CFI, I learned to always step outside mycomfort zone and never accept the bare minimum. I have had the greatfortune to be able to experiment greatly on my fitness journey and there isno ‘end’ for myself, just different seasons. I truly believe that it isimportant for everyone to do what makes them happy. If you like long runs,bike rides, cross fit wods, Brazilian jiu-jitsu, or riding dirt bikes andmotorcycles, good, get outside and do it. Nearly everyone in the gym hasheard me talk about my ridiculous exercise experiences and I have found twothings to be true: 1) Don’t knock it till you try it. 2) Make itchallenging, but don’t make it demoralizing.Crossfit Ignite has enabled me to find the strength and endurance tocomplete a Century bike ride (100 miles), complete half marathons, and playairsoft with kids 10+ years my juniors. It’s simply incredibleBy constantly varying and changing your workouts ‘seasonally’ you canexperience tremendous growth. Be purposeful, be mindful, care about whatyou’re doing and why you’re doing it, lift moderate to heavy weight,prioritize purposeful recover, don’t go two days without working out, andstress your cardiovascular system.I began this journey 10 years ago. Stick with it, relish the good days, andaccept the bad days.“It is not the critic who counts; not the man who points out how the strongman stumbles, or where the doer of deeds could have done them better. Thecredit belongs to the man who is actually in the arena, whose face ismarred by dust and sweat and blood; who strives valiantly; who errs, whocomes short again and again, because there is no effort without error andshortcoming; but who does actually strive to do the deeds; who knows greatenthusiasms, the great devotions; who spends himself in a worthy cause; whoat the best knows in the end the triumph of high achievement, and who atthe worst, if he fails, at least fails while daring greatly, so that hisplace shall never be with those cold and timid souls who neither knowvictory nor defeat.” ~Theodore Roosevelt

We'd love to send you information about our pricing

Enter your details below and we'd be happy to show you our rates and explain them in detail!